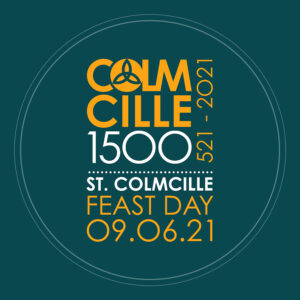 Organisations across the North West are gearing up for the Feast Day of St Colmcille on 9th June – a date that is all the more special given this historic year as the 1500th anniversary of the Saint’s birth.  Whilst the ongoing COVID restrictions may be limiting physical events that can take place, there is plenty happening online as well as church services and exhibitions open to the public.

Celebrations kick off with the 2021 American Conference for Irish Studies (ACIS) on 2-5 June 2021, broadcast live from Ulster University’s Magee campus, where academics and historians from across the globe will bring Colmcille’s rich academic legacy to life.  Some of the live streamed sessions will be available to the public at www.acis2021.com including a keynote address byMichael D. Higgins, President of Ireland on Thursday 3 June at 5pm as well as addresses by the Irish and UK ambassadors to the US on Saturday 5June.

As part of the conference, a special programme ‘Slí Colmcille’ presented by Líonra Leitir Ceanainn in conjunction with Letterkenny Regional Cultural Centre will premiere live on Friday 4 June at 8pm on www.facebook.com/LIONRALC  with music and poetry, history and storytelling from a host of wonderful guests across Ireland and Scotland.

On Sunday 6 June 2021, the Saint’s birth place in Gartan, Donegal will be celebrated in two special services.  Mass will be broadcast live on RTE One at 11.00am to celebrate both Corpus Christi and the 1500th anniversary, with celebrant Fr Michael McKeever joined by parishioners from St Colmcille’s Church, Glendowan.  A Church of Ireland Service of Holy Communion in St Columba’s Church, Gartan in Church Hill at 12.30pm will celebrate the international heritage of Columba and can be viewed live at www.facebook.com/StColumbaGartan  or later at www.youtube.com/channel/UCCunnIlJgF9K_Rcz0-Vm2-Q/

Raphoe Diocese Colmcille 1500 will present ‘Colmcille: A Lasting Legacy’, a virtual series on the life and legacy of Colmcille/Columba, to be streamed in three parts via YouTube on 6, 7 and 8 June 2021 at 8pm. The series will include contributions from Bishop Alan McGuckian SJ and Rev. David Houlton, Rector of Gartan as well as historians, academics and other Columban experts. Original poetry and music compositions will also feature as well as excerpts from the work of local schoolchildren and an extract from ‘The Enemy Within’ in Gaeilge.  Margaret McAteer’s new musical setting of ‘Alone with None but Thee’ will also premiere with Colmcille Gospel Choir and featuring  guest singers such as Moya Brennan along with other choirs, performers and Glencolmcille Primary School. Further details can be found at: https://tockify.com/colmcille1500/detail/138/1622934000000.

On Wednesday 9th June, RTE News Channel will be live at 10.30am at St. Colmcille’s Church, Glendowan to mark the Feast Day. Many other Colmcille locations and places dedicated to the Saint will also mark the day.  For example, St Columba’s Church of Ireland in Glencolmcille will be open to visitors throughout the day and in Fanad, mass will be streamed from St Colmcille’s Well at 10am at www.facebook.com/stmarysfanavolty.

Whilst in Derry, the place of Colmcille’s first and most beloved monastery, Bishop Donal McKeown will celebrate Mass in St Columba’s Church Long Tower at 10.00am and will bless water from St Columba’s Well which will be available in the Church after the service. You can watch the special mass at http://longtowerchurch.org/webcam. Aras Cholmcille – St. Columba Heritage Centre, next to Long Tower, will be re-opening in time for the Feast Day and you can visit from 11am to 3pm or online at www.stcolumbaheritage.com. Wooden sculptures will also be on display at the Well.

The Churches Trust will launch a short film online at 10am at www.youtube.com/channel/UCg6a7ovcN-RDhw-JPVZJ5Kg  to showcase its Columba Schools Project and the completion of a storybook by pupils in three primary schools – Fountain, Nazareth House and Longtower.

Whilst later at St Augustine’s Church, a Columba Pageant entitled “Columba: a Triptych” will take place at 7.30pm. In three parts, it will tell the stories of his mother’s dream, the battle his kinsmen began on his behalf and his eventual remorse. For further details and tickets email weechurch@btinternet.com  or visit www.facebook.com/weechurch.

Two new Colmcille exhibitions will also be open on the Feast Day.  ‘Colmcille – Man and Myths’ is at the Tower Museum until September before moving to Donegal County Museum. This is a joint exhibition between the two Councils which will take people on journey of discovery around the world of Colmcille in Donegal and Derry.  Whilst in Donegal Central Library in Letterkenny, a limited edition of the ‘Faksimile Verlag Luzern’ Book of Kells presented in a decorative case will be on display alongside a limited edition poem by Seamus Heaney ‘Colum Cille the Scrib’.

Deirdre Harte, Colmcille 1500 Project Manager with Donegal County Council, said: “We’re delighted with the number and range of events that are taking place around the Feast Day across the North West.  Whilst physical events and access to exhibitions will be limited in numbers in line with current COVID restrictions there is plenty to view online. You can find further information on Colmcille 1500 on our website at www.colmcille1500.com or on Facebook at www.facebook.com/Colmcille1500NW”.