Funding awarded to bring Colmcille to life across Derry 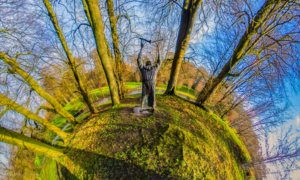 Eighteen projects from across the Council areas of Derry, Strabane and Donegal celebrating the history, music, drama, literature, art, and folklore of Colmcille, have been successful in securing grant funding made available as part of the Colmcille 1500 Community Grant Scheme that was launched in January 2021.

The scheme is part of the Colmcille 1500 year-long commemoration marking the 1500th anniversary of the birth of Colmcille (also known as Columba).

The year recognises the importance and legacy of the 6th-century saint, not only for Derry and Donegal but for the island of Ireland, Scotland and across the world.  The year-long celebrations will last from the 7th December 2020 to 7th December 2021.

Over 70 applications were received for the grants scheme with the 18 successful applicants each obtaining grants of €2,000 or £1,800 to be part of the 1500th commemorations taking place during 2021.

“We are delighted to have awarded funding that allows us to showcase the wealth of talent and creativity we have in our local communities in the Derry Strabane and Donegal Council areas. It’s a fantastic opportunity to get local people involved in the celebrations and help us bring  Colmcille to a range of audiences, young and old, in a variety of ways such as through concerts, short films, virtual trails, a walking festival, poetry workshops, art installations, new music compositions and a young ambassadors programme.”

Among the Derry and Strabane projects that were successful in the grant aid process were the Art Arcadia for their In-lumino art installation that will be located within the grounds of the St Augustine’s Graveyard and Garden on the Columba Heritage Trail and Ardnashee School and College for their ‘Trasna na dTonnta’ music, dance and storytelling outdoor performance telling the story of Colmcille’s journey to Tory Island.

The Gasyard Wall Féile secured funding to deliver their unique ‘Colmcille Returns’ drama film while the Allegri Choir will perform a ‘Connecting with Colmcille in Song’ music concert and the City of Derry International Choir Festival have been commissioned to create a piece of music for choir and cello inspired by the writings of Colmcille.

Funding was also secured by St Augustine’s Church to deliver a contemporary narrative of key aspects of Columba’s story entitled ‘Imagine Hanging Out with a 1500 year old’ while St Columb’s Park House will deliver a virtual trail called ‘Colmcille the Man’, covering three sites within St Columb’s Park. REACH Across YES project secured funding as part of the programme to deliver a cross community and shared learning engagement project for young people while the Churches Trust will deliver an interactive and engaging Columba Young Ambassador Programme which will produce a new app for the Columba Heritage Trail.