These 17 projects have been awarded funding through the Colmcille 1500 Grant Scheme which was set up to to support community projects that contribute to the 1500th commemorations. The grants are administered by Donegal County Council and Derry City & Strabane District Council as part of the programme funded by the North West Development Fund and Creative Ireland. 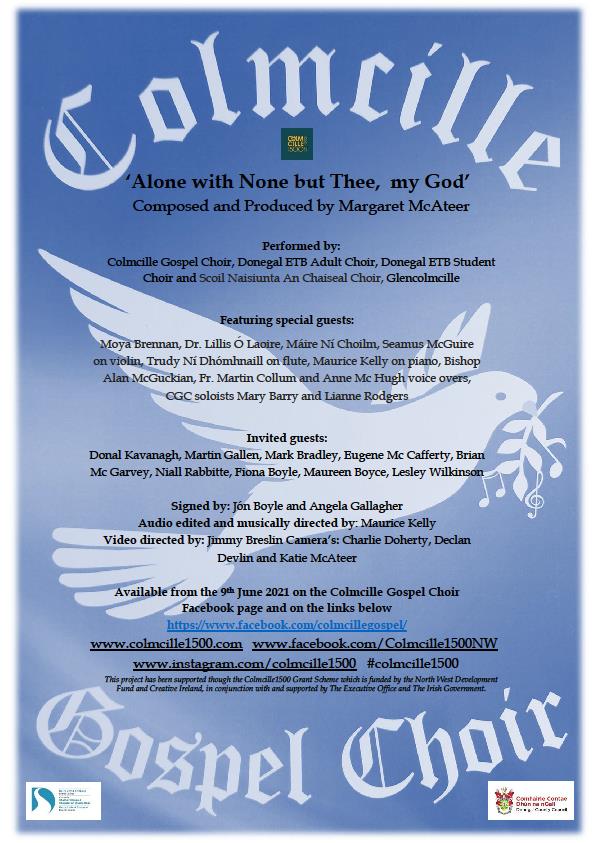 This project is a unique and highly participative concert which brought together groups and individuals across different generations, from different perspectives and different areas, with well-known musicians and artists, to sing in celebration of Colmcille 1500. It created joy, lifted spirits and will leave behind a legacy of beautiful, specifically commissioned choral pieces. A film of the concert was launched in Gartan on 9th June 2021. 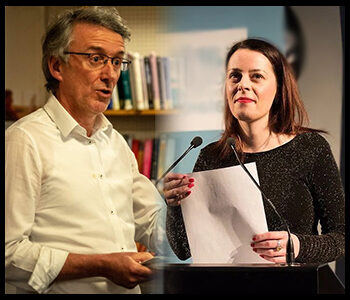 On the Trail of Colmcille’ included online literary events to mark the 1500th anniversary of Colmcille’s birth. Led by two award winning poets – Irish poet Annemarie Ní Churreáin and Scottish poet Charlie Gracie, these included public workshops, poetry readings and webinar discussions. The events drew strongly on the Irish / Scottish connection, focusing on Colmcille’s life before and after his move to Scotland as well as the impact of his work .The aim was to create a space for poetry, reflection and the exploration of cross-cultural perspectives of Colmcille. 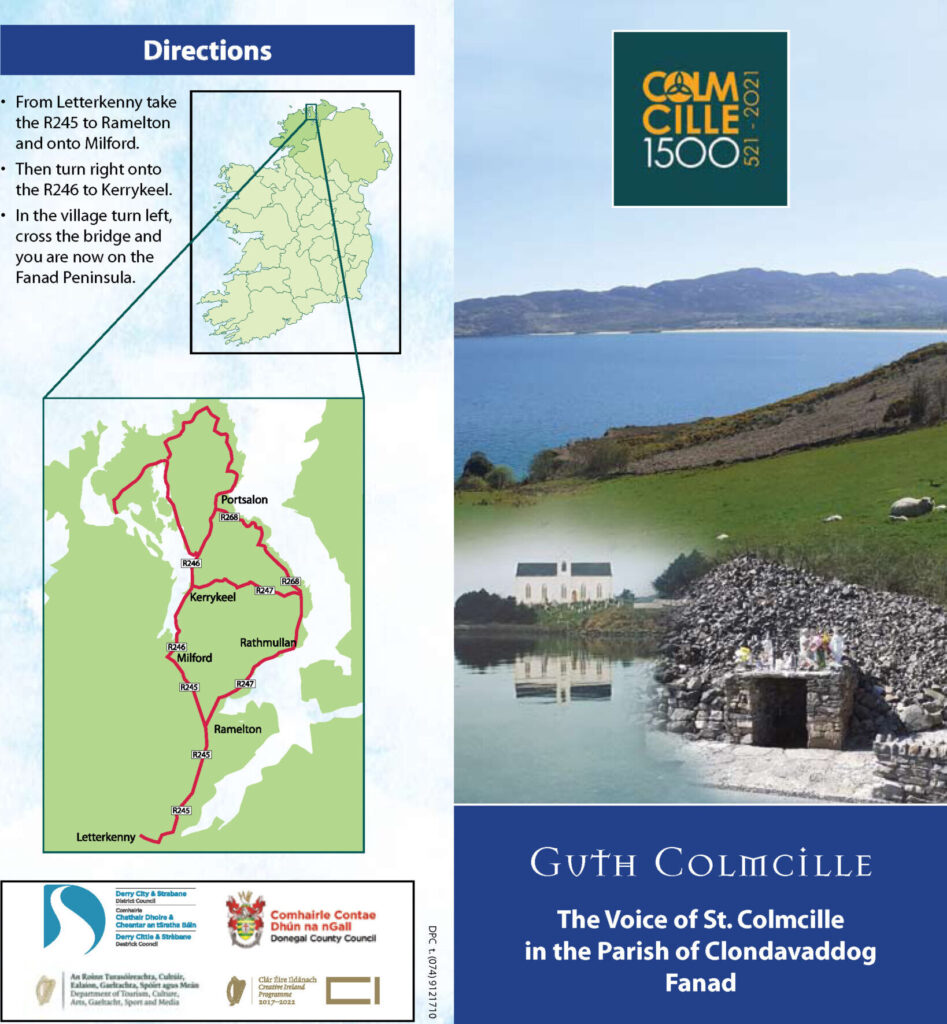 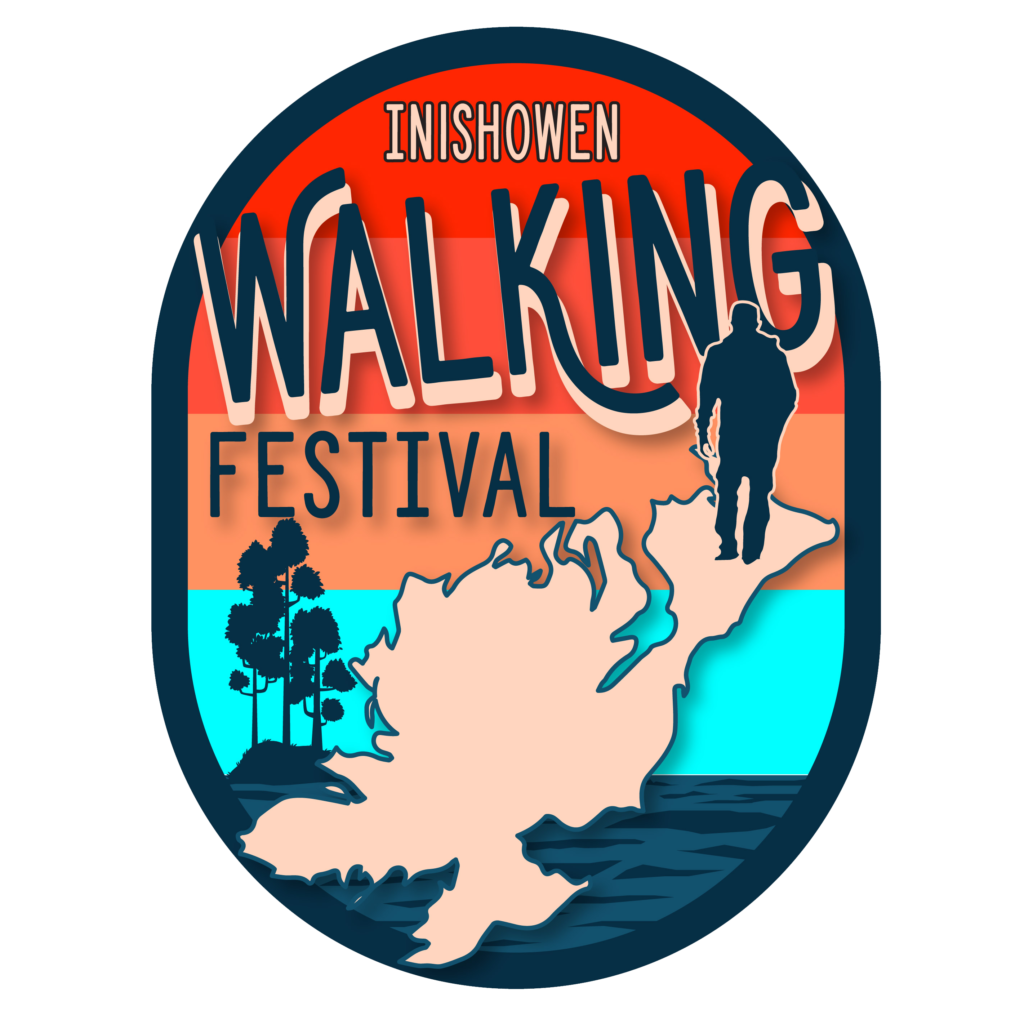 Inishowen Colmcille Walking Festival aimed to generate awareness of the 1500th anniversary of the birth of Colmcille as well as celebrate his footprint in Inishowen. A cross-dimensional celebration combining the outdoors and the treasures we find in its midst; rich in cultural history and heritage. The walks focused around specific places of interest such as St Columba’s Church Straid (the site of St Colmcille’s knee prints) and Portcille (where Colmcille left from to go to Iona). The festival included  12 walks taking place from 10-12 September 2021 with online resources created for use by the community and visitors as a legacy of the event. 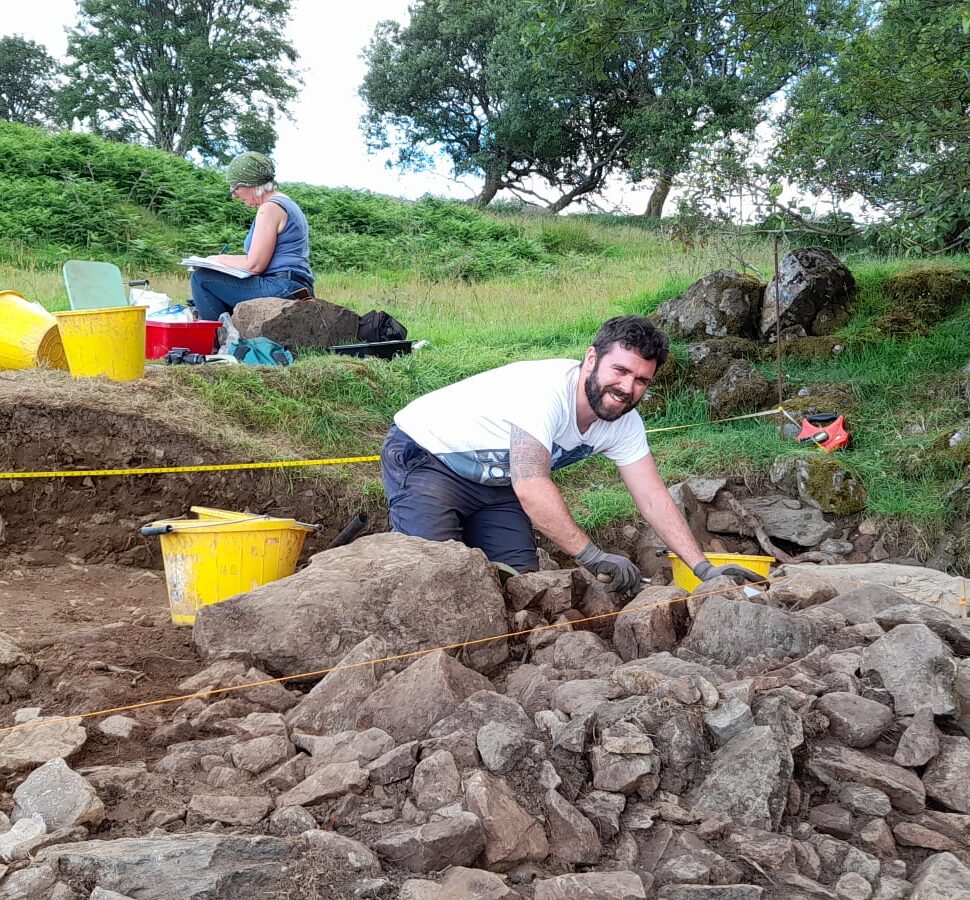 Disert in South Donegal is an early medieval church site, graveyard and holy well dedicated to St Colmcille. An archaeological excavation took place in the summer of 2021 during which community volunteers and archaeology students worked together to investigate the origins of Disert and its association with St Colmcille. A short video to share findings followed in August 2021 during National Heritage Week. Nationally and internationally, the knowledge gained from the excavation will feed into wider academic discussion on the nature of the early Church and the work of Colmcille. 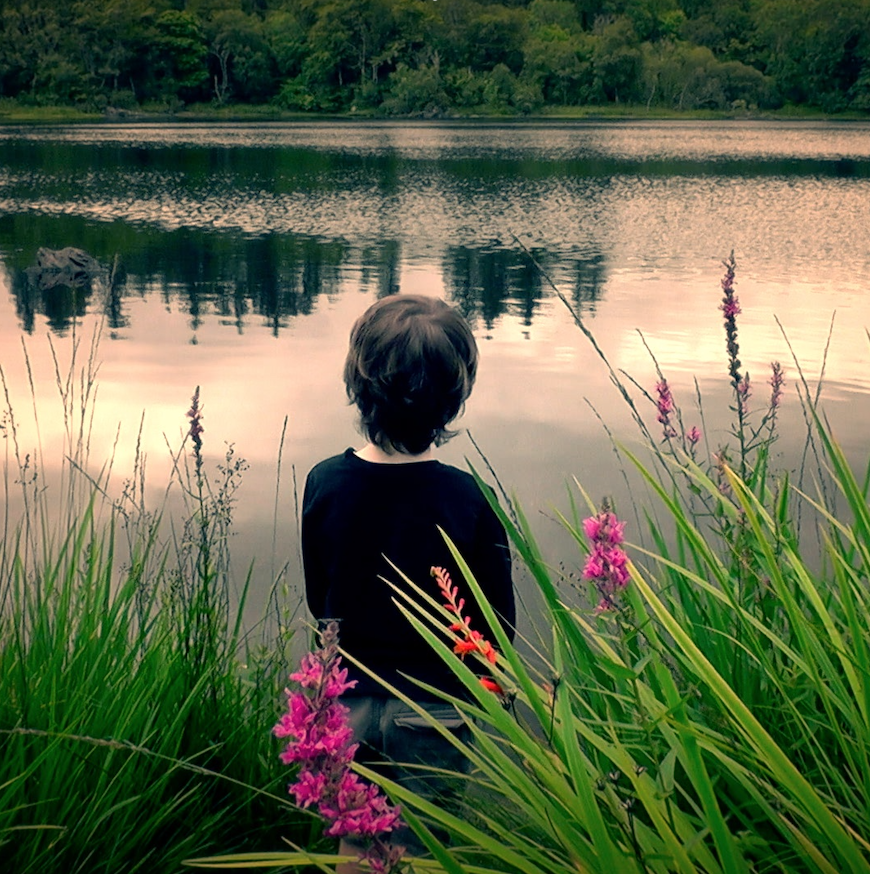 The project created an original short experimental film as a new, refreshing and contemplative interpretation of the story of Saint Colmcille, the monk and powerful spiritual leader, told by a mother remembering her child at play. Showcasing the many historical sites at Gartan, it shows that though modern life goes on, Gartan retains its sense of quiet spirituality. The project will allow people from all over the world to experience the magical place where Colmcille was a boy. 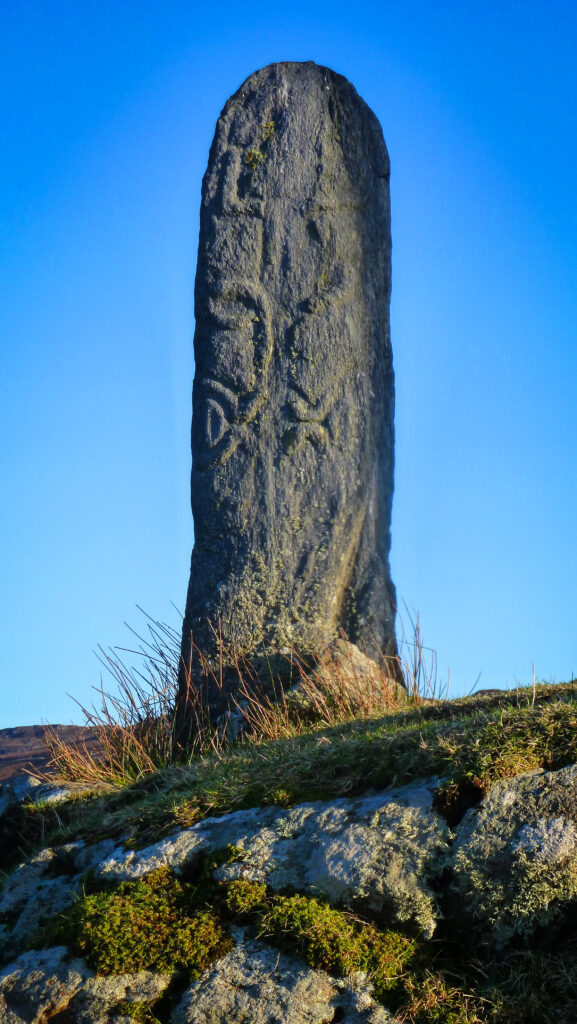 Gleann Cholm Cille has long been recognised as a key site in the Columban tradition, with its expansive pilgrimage route or Turas and a rich folkloric tradition associated with the saint. Colm Cille’s influence on the region and its community is inscribed on the landscape in a tapestry of placenames attesting the saint’s presence in the valley and his heritage in folklore and legend. This project is producing an interactive digital map showcasing the rich tapestry of minor placenames associated with the saint – such as field names, physical and man-made features. It includes a series of workshops with the local community to gather stories or history associated with these minor placenames. 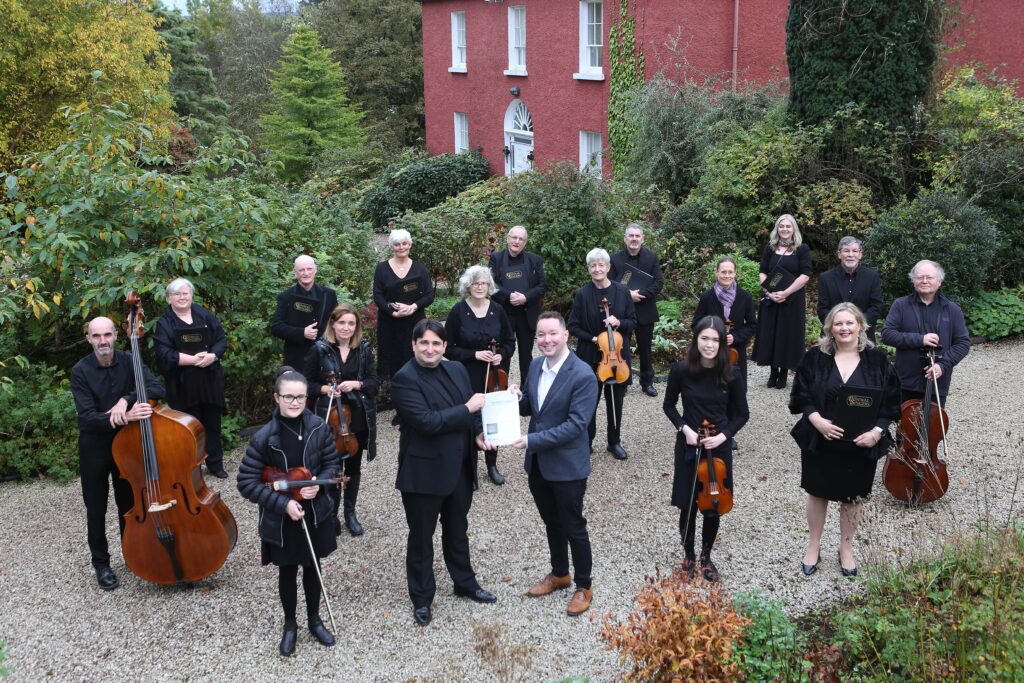 This project has provided a dramatic telling of an important yet little-known incident in Colmcille’s life that is extremely relevant in the context of this anniversary year – the effect of a pandemic in Colmcille’s monastic career. Hear the story of Mobhi’s Belt in a dramatic musical setting by Derry composer Seán Doherty and performed as a world premiere by the combined forces of Donegal Chamber Orchestra and the Conwal Singers. 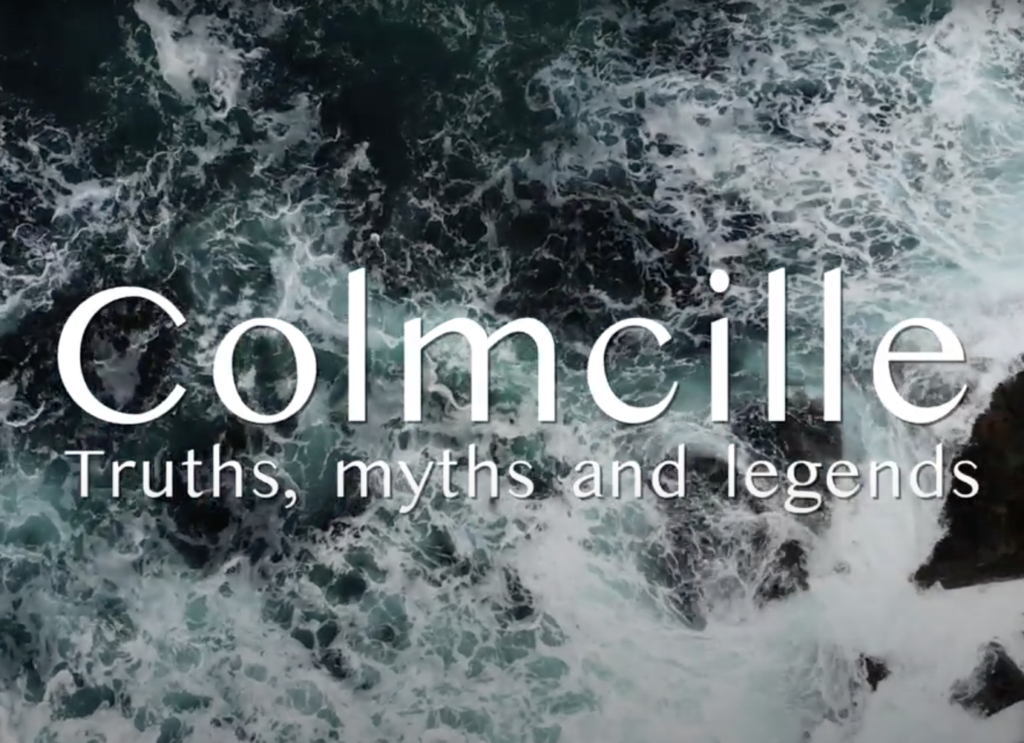 Colmcille, Myths, Legends and Truths,  a short video exploring the Donegal landscape, pre-Christian rituals and the culture into which the saint was born and raised. Presented by Dr. Brian Lacey, one of Ireland’s  leading authorities on Colmcille. Facts and folklore has been filmed at locations associated with the saint and his ancestors, encouraging communities to visit the various sites and to look at these locations with fresh eyes. It will provoke debate and bring a fresh impetus to the story of one of Ireland’s important saints whose influence is felt a millennium across Ireland, Scotland and further afield. 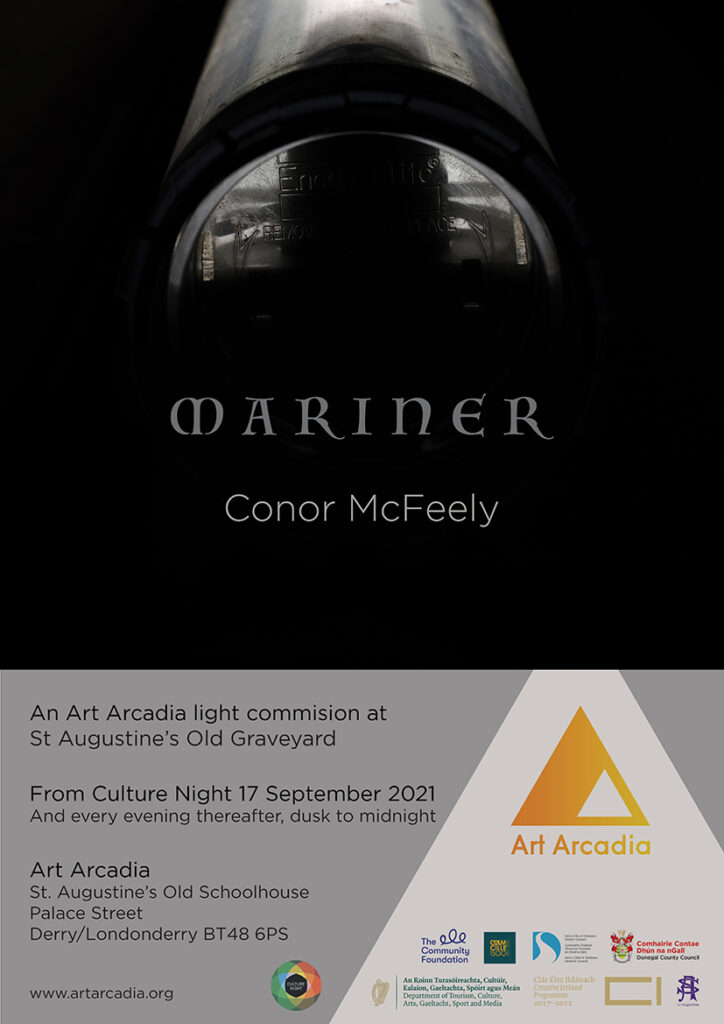 In-lumino in Latin means “to illuminate”. OurArt Arcadia joins the Colmcille 1500 celebrations with a commissioned outdoor permanent Light Art installation within the grounds of St Augustine’s Old Graveyard & Garden on the Columba Heritage Trail.  It provides an immersive visitor experience that highlights the importance and legacy of Colmcille as a uniting and shared figure who crosses communities, generations and nations. 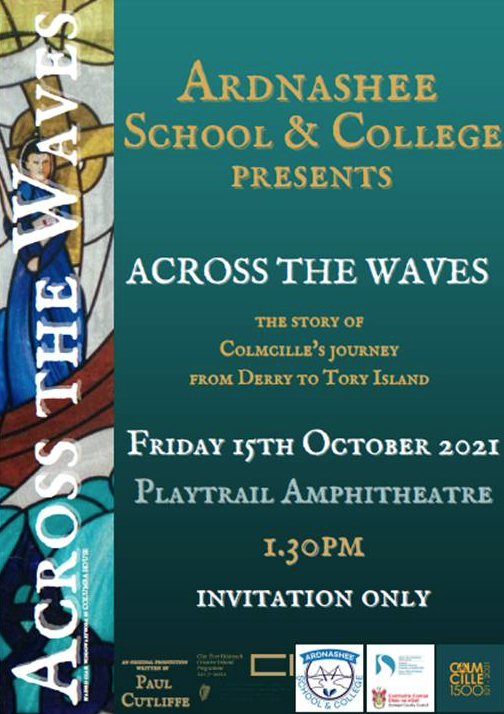 The project brings together original music, dance and story–telling in a an outdoor performance with pupils front and centre. The narrative is an original story about Colmcille’s journey to, and times spent on, Toraigh island. With landscape as breathtaking as the surrounding Atlantic Ocean is ferocious, Toraigh has endured many challenges over a rich and turbulent history. Colmcille’s legacy there reflects a period of calm that has endured, and the yet standing bell-tower encapsulates this vibrant Columban heritage. Trasna na dTonnta is Colmcille’s Toraigh story. 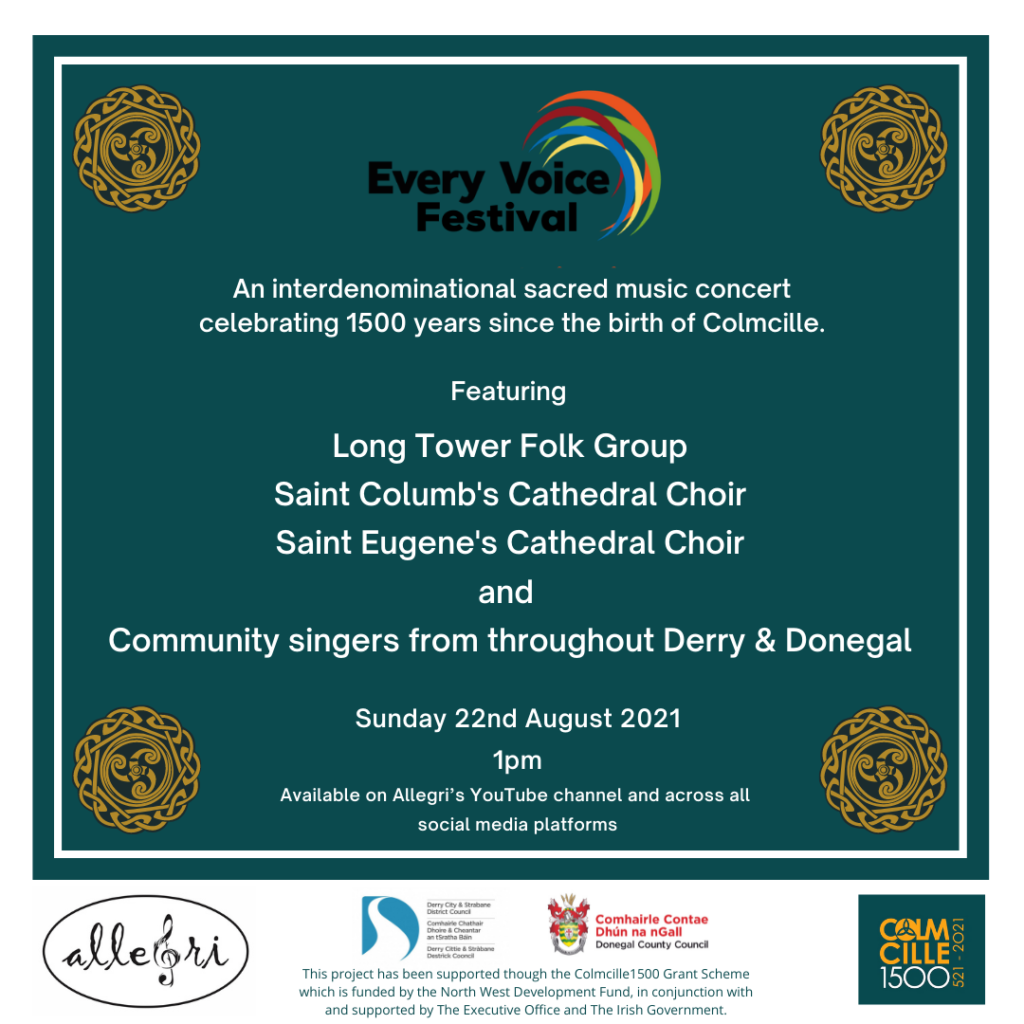 The project aims to encourage arts participation by celebrating the birth of Colmcille through music. ‘Connecting with Colmcille in Song’ is an interdenominational evening of music bringing together local choirs in sacred song. It will be recorded between St Columb’s Cathedral and Longtower Chapel/Áras Cholmcille with a candle lit procession connecting both churches. A concert performance will be showcased on 21st August 2021 as part of the annual ‘Every Voice Festival’. 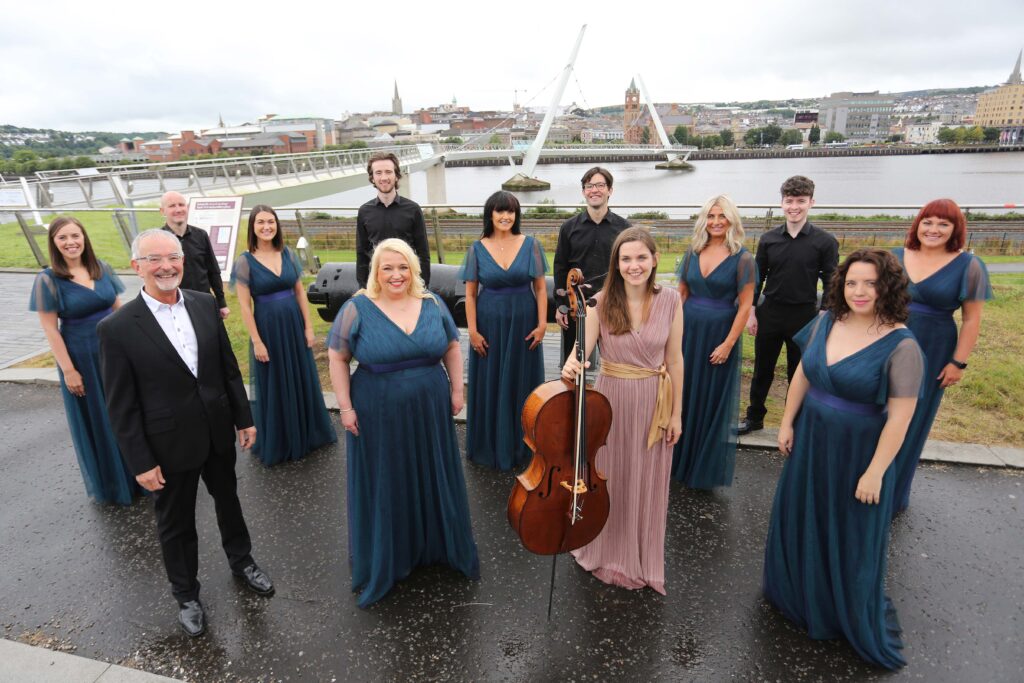 A new commission for Colmcille, an exciting new piece of music for choir and cello inspired by the writings of Colmcille, was premiered in the historic surroundings of St Columba’s Church, Long Tower and St Columb’s Cathedral, as part of the City of Derry International Choir Festival in October 2021. The performance by Codetta and cellist Kim Vaughan showcases the vibrancy of contemporary choral music and reflects Colmcille’s local and international legacy. 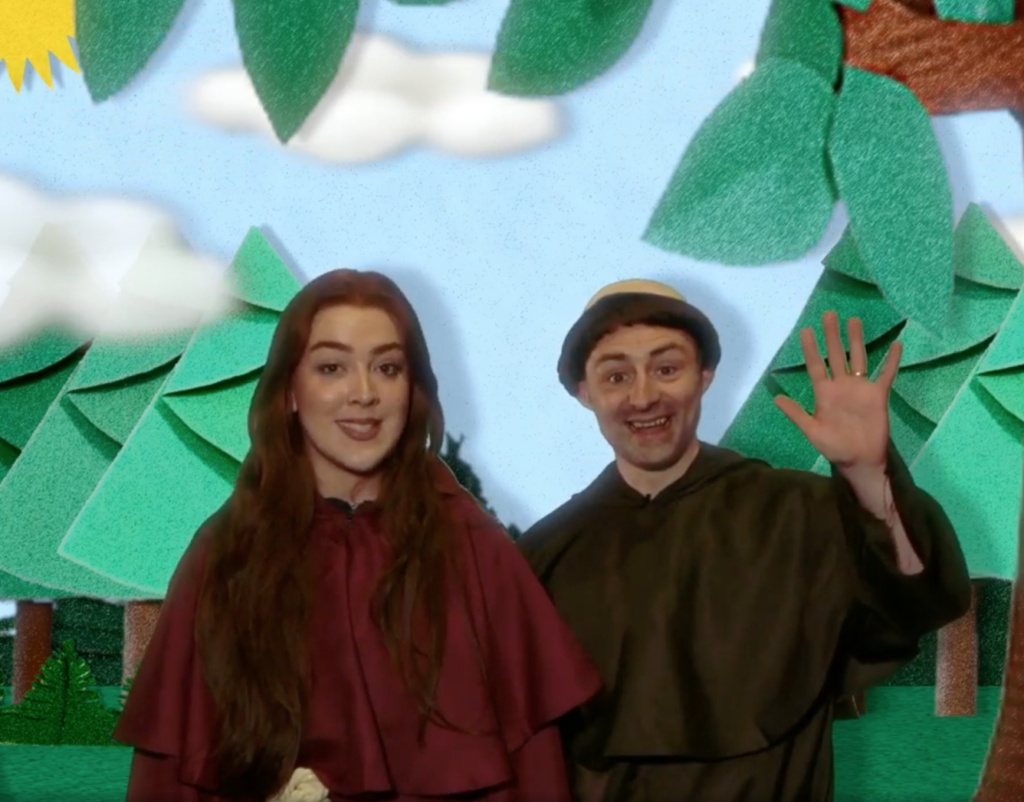 This project takes an innovative and contemporary approach to the exploration of how the story of Columba dovetails with the genesis of Derry, featuring St Augustine’s Church as one of the significant sites relating to Colmcille’s Derry – ‘the wee church on the walls’. The project includes a humorous scripted narration of key aspects of Colmcille’s story – creating an AV digital resource to be made available to schools and tourists within the city.  It highlights the links between folklore, place, tradition and cultural heritage particularly through spirituality and storytelling. 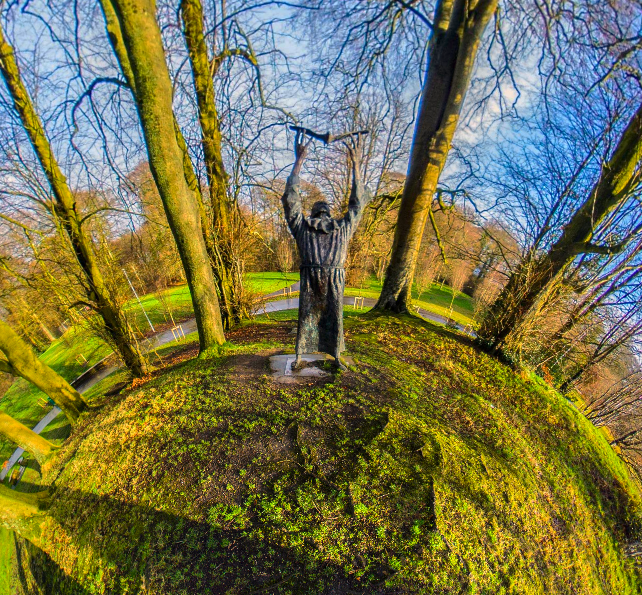 St Columb’s Park House developed a virtual trail to explore Colmcille the Man and create curiosity around lessons for us today within the wider context of peacebuilding – linking to its role as a peace and reconciliation centre.  A 360° self-guided virtual tour focuses on three sites within St Columb’s Park including the house, the statue of Columba and the remains of St Brecan’s church. It has created a digital legacy product and provides an opportunity to engage with the Columban story and legacy through new lenses. 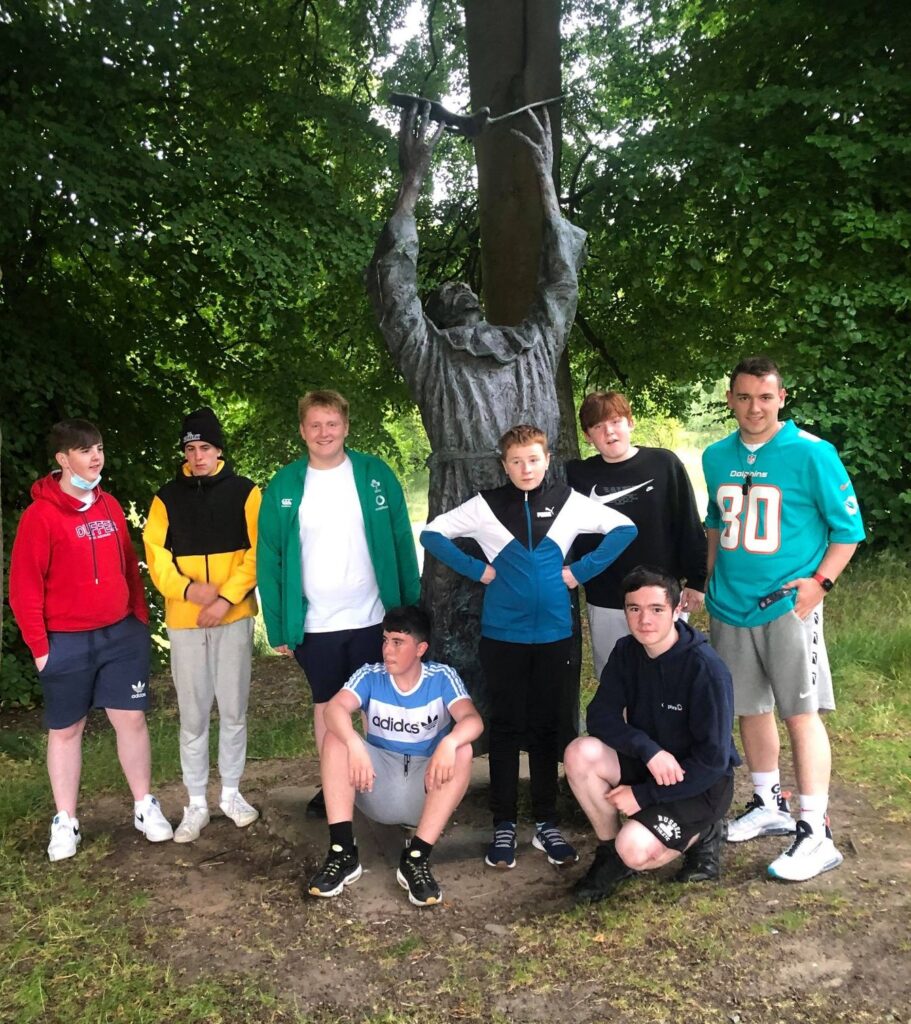 The project aims to increase the awareness and impact of St Colmcille through shared learning opportunities and to promote cross-community engagement amongst young people, that will contribute to a shared and peaceful future.  It included groupwork and education visits to key locations connected to St Colmcille by 30 young people from across the North West.  Participants are also creating a garden piece to be placed in the Holywell Garden of Reflection in Derry. 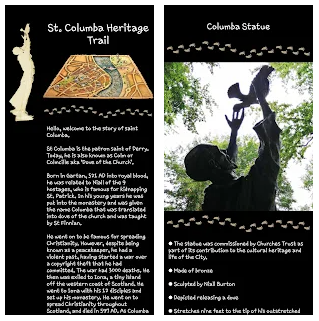 Through engaging, interactive and fun workshops, this project explored the life and legacy of St Columba, empowering young people to play a role in ensuring that the lessons and legacy of Colmcille continue, through the design and development of an app on the Columba Heritage Trail. The young people were the first to complete a new OCN on the life and legacy of St Columba as well as building skills in app development. The app will provide historical, cultural and religious information about main points on the trail, enhancing the tourist experience and creating a lasting digital legacy.